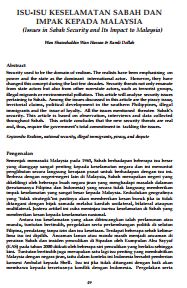 Security used to be the domain of realism. The realists have been emphasising on power and the state as the dominant international actor. However, they have changed this concept during the last few decades. Security threats not only emanate from state actors but also from other non-state actors, such as terrorist groups, illegal migrants or environmental pollution. This article will analyse security issues pertaining to Sabah. Among the issues discussed in this article are the piracy issue, territorial claims, political development in the southern Philippines, illegal immigrants and the issue of loyalty. All the issues mentioned threaten Sabah’s security. This article is based on observation, interviews and data collected throughout Sabah. This article concludes that the new security threats are real and, thus, require the government’s total commitment in tackling the issues.