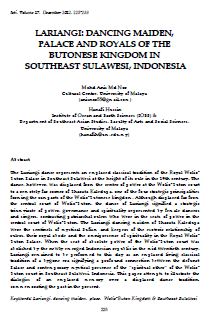 The Lariangi dance represents an emplaced classical tradition of the Royal Wolio-Buton Palace in Southeast Sulawesi at the height of its rule in the 19th century. The dance, however, was displaced from the center of power at the Wolio-Buton court to a remotely far corner of Bharata Kaledupa, one of the four strategic principalities forming the ramparts of the Wolio-Butonese kingdom. Although displaced far from the central court of Wolio-Buton, the dance of Lariangi signified a strategic triumvirate of power, governance and spirituality represented by female dancers and singers, contrasting patriarchal rulers who were in the seats of power in the central court of Wolio-Buton. The Lariangi dancing maiden of Bharata Kaledupa were the sentinels of mystical Sufism and keepers of the esoteric relationship of rulers, their royal abode and the omnipresence of spirituality in the Royal Wolio-Buton Palace. When the seat of absolute power of the Wolio-Buton court was abolished by the newly emerged Indonesian republic in the mid twentieth century, Lariangi remained to be performed to this day as an emplaced living classical tradition of a bygone era signifying a profound connection between the defunct Palace and contemporary mystical presence of the â€œspiritual otherâ€ of the Wolio-Buton court in Southeast Sulawesi, Indonesia. This paper attempts to illustrate the dialogics of an emplaced memory over a displaced dance tradition, commemorating the past in the present.