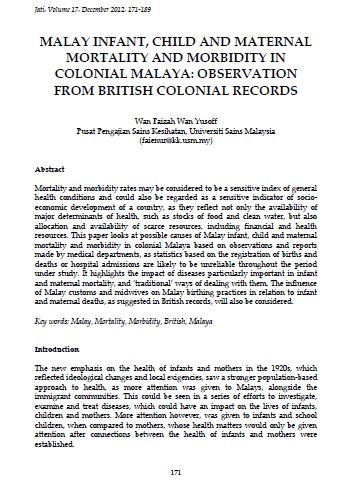 Mortality and morbidity rates may be considered to be a sensitive index of general health conditions and could also be regarded as a sensitive indicator of socio-economic development of a country, as they reflect not only the availability of major determinants of health, such as stocks of food and clean water, but also allocation and availability of scarce resources, including financial and health resources. This paper looks at possible causes of Malay infant, child and maternal mortality and morbidity in colonial Malaya based on observations and reports made by medical departments, as statistics based on the registration of births and deaths or hospital admissions are likely to be unreliable throughout the period under study. It highlights the impact of diseases particularly important in infant and maternal mortality, and ‘traditional’ ways of dealing with them. The influence of Malay customs and midwives on Malay birthing practices in relation to infant and maternal deaths, as suggested in British records, will also be considered.