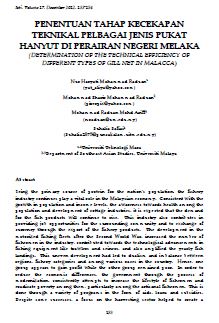 Being the primary source of protein for the nation’s population, the fishery industry continues play a vital role in the Malaysian economy. Consistent with the growth in population and income levels, the awareness towards health among the population and development of cottage industries, it is expected that the demand for the fish products will continue to rise. This industry also contributes in providing job opportunities for the surrounding community and to exchange of currency through the export of the fishery products. The development in the motorized fishing fleets after the Second World War, increased the number of fishermen in the industry, contributed towards the technological advancements in fishing equipment like trawlers and seiners, and also amplified the yearly fish landings. This uneven development had led to dualism and imbalance between regions, fishery categories and among various races in the country. Hence, one group appears to gain profit while the other group remained poor. In order to reduce the economic differences, the government through the process of modernization, consistently attempts to increase the lifestyle of fishermen and eradicate poverty among them, particularly among the artisanal fishermen. This is done through a variety of programs in the form of aids, loans and subsidies. Despite some successes, a focus on the harvesting sector helped to create adependency on state, contributed to overexploitation of certain fish stocks. The aim of this study is to determine the technical efficiency of different types of gill net in Malacca. Malacca had been chosen as a location of this study because, majority of the artisanal fishermen in Malacca are using gill net as the fishing gear. Stochastic Frontier Production Function Model had been applied to determine the technical efficiency score of the various gill nets in Malacca. The results indicate that most of the out-board engine have lower scores and below the level of the technical efficiency, and for sure they are not efficient. Moreover, the results showed that not only demography factors are affecting the technical efficiency of the vessels, but the level of fishing stock also play a vital factor on affecting the technical efficiency. Restoration and preservation must be done by the government in order to get the sustainable and continuous in the fishing resources, especially for the inshore resources. Hence, fishing efforts in the inshore area must be controlled by the Fishing Manager seriously for the sake of this Malaysian fishing industry’s future.