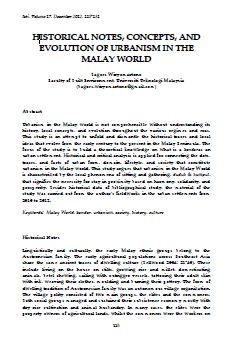 Urbanism in the Malay world is not comprehensible without understanding its history, local concepts, and evolution throughout the various regimes and eras. This study is an attempt to unfold and dismantle the historical traces and local ideas that evolve from the early century to the present in the Malay Peninsula. The focus of the study is to build a theoretical knowledge on what is a bandaras an urban settlement. Historical and critical analysis is applied for connecting the dots, traces, and facts of urban form, domain, lifestyle, and society that constitute urbanism in the Malay world. This study argues that urbanism in the Malay World is characterized by the local phenomena of sitting and gathering, duduk & kumpul, that signifies the necessity for stay in proximity based on harmony, solidarity, and prosperity. Besides historical data of bibliographical study, the material of the study was carried out from the author’s fieldworks in the urban settlements from 2010 to 2012.