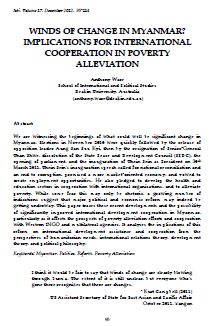 We are witnessing the beginnings of what could well be significant change in Myanmar. Elections in November 2010 were quickly followed by the release of opposition leader Aung San Suu Kyi, then by the resignation of Senior-General Than Shwe, dissolution of the State Peace and Development Council (SPDC), the opening of parliament, and the inauguration of Thein Sein as President on 30th March 2011. Thein Sein's inauguration speech called for national reconciliation and an end to corruption, promised a more market-oriented economy, and vowed to create employment opportunities. He also pledged to develop the health and education sectors in cooperation with international organisations, and to alleviate poverty. While some fear this may only be rhetoric, a growing number of indications suggest that major political and economic reform may indeed be getting underway. This paper traces these recent developments and the possibility of significantly improved international development cooperation in Myanmar, particularly as it affects the prospects of poverty alleviation efforts and cooperation with Western INGO and multilateral agencies. It analyses the implications of this reform on international development assistance and cooperation from the perspectives of humanitarian needs, international relations theory, development theory, and political philosophy.