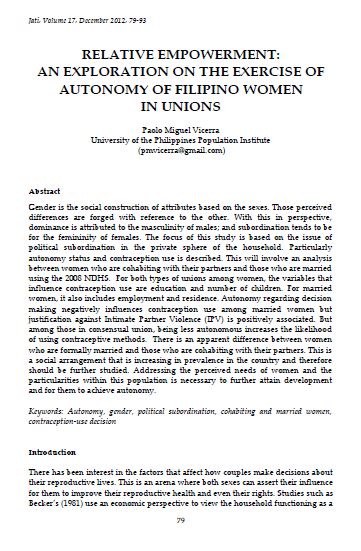 Gender is the social construction of attributes based on the sexes. Those perceived differences are forged with reference to the other. With this in perspective, dominance is attributed to the masculinity of males; and subordination tends to be for the femininity of females. The focus of this study is based on the issue of political subordination in the private sphere of the household. Particularly autonomy status and contraception use is described. This will involve an analysis between women who are cohabiting with their partners and those who are married using the 2008 NDHS. For both types of unions among women, the variables that influence contraception use are education and number of children. For married women, it also includes employment and residence. Autonomy regarding decision making negatively influences contraception use among married women but justification against Intimate Partner Violence (IPV) is positively associated. But among those in consensual union, being less autonomous increases the likelihood of using contraceptive methods. There is an apparent difference between women who are formally married and those who are cohabiting with their partners. This is a social arrangement that is increasing in prevalence in the country and therefore should be further studied. Addressing the perceived needs of women and the particularities within this population is necessary to further attain development and for them to achieve autonomy.