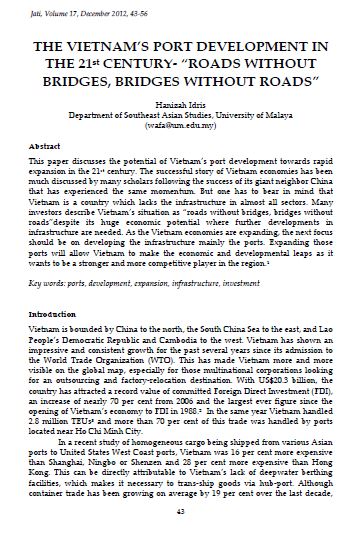 This paper discusses the potential of Vietnam’s port development towards rapid expansion in the 21st century. The successful story of Vietnam economies has been much discussed by many scholars following the success of its giant neighbor China that has experienced the same momentum. But one has to bear in mind that Vietnam is a country which lacks the infrastructure in almost all sectors. Many investors describe Vietnam’s situation as “roads without bridges, bridges without roads”despite its huge economic potential where further developments in infrastructure are needed. As the Vietnam economies are expanding, the next focus should be on developing the infrastructure mainly the ports. Expanding those ports will allow Vietnam to make the economic and developmental leaps as it wants to be a stronger and more competitive player in the region.1
Key words: ports, development, expansion, infrastructure, investment