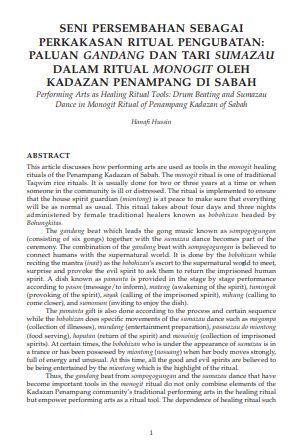 This article discusses how performing arts are used as tools in the monogit healing rituals of the Penampang Kadazan of Sabah. The monogit ritual is one of traditional Taqwim rice rituals. It is usually done for two or three years at a time or when someone in the community is ill or distressed. The ritual is implemented to ensure that the house spirit guardian (miontong) is at peace to make sure that everything will be as normal as usual. This ritual takes about four days and three nights administered by female traditional healers known as bobohizan headed by Bohungkitas. The gandang beat which leads the gong music known as sompogogungan (consisting of six gongs) together with the sumazau dance becomes part of the ceremony. The combination of the gandang beat with sompogogungan is believed to connect humans with the supernatural world. It is done by the bobohizan while reciting the mantra (inait) as the bobohizan’s escort to the supernatural world to meet, surprise and provoke the evil spirit to ask them to return the imprisoned human spirit. A dish known as pamanta is provided in the stage by stage performance according to pason (message/to inform), matang (awakening of the spirit), tumingak (provoking of the spirit), sayak (calling of the imprisoned spirit), mihung (calling to come closer), and sumonson (inviting to enjoy the dish). The pamanta gift is also done according to the process and certain sequence while the bobohizan does specific movements of the sumazau dance such as magampa (collection of illnesses), mundang (entertainment preparation), pasasazau do miontong (food serving), hoputan (return of the spirit) and monoinig (collection of imprisoned spirits). At certain times, the bobohizan who is under the appearance of sumazau is in a trance or has been possessed by miontong (nosuang) when her body moves strongly, full of energy and unusual. At this time, all the good and evil spirits are believed to be being entertained by the miontong which is the highlight of the ritual. Thus, the gandang beat from sompogogungan and the sumazau dance that have become important tools in the monogit ritual do not only combine elements of the Kadazan Penampang community’s traditional performing arts in the healing ritual but empower performing arts as a ritual tool. The dependence of healing ritual such as monogit to the presence of a traditional healer (bobohizan and bohungkitas), dish (pamanta), gandang beat, sompogogungan music and sumazau dance, very clearly empowers the ritual and traditional performing arts.