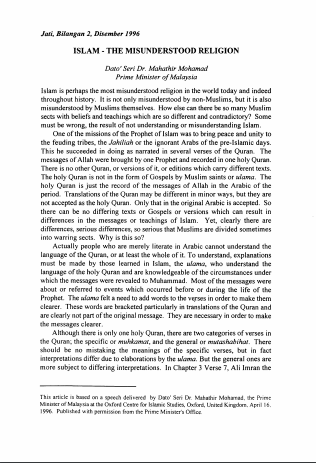 lslam is perhaps the most misunderstood religion in the world today and indeed throughout history. It is not only misunderstood by non-Muslims, but it is also misunderstood by Muslims themselves. How else cant here be so many Muslim sects with beliefs and teachings which are so different and contradictory' Some must be wrong, the result of not understanding or misunderstanding Islam. One of the missions of the Prophet of Islam was to bring peace and unity to the feuding tribes, the Jahiliah or the ignorant Arabs of the pre-lslamic days. This he succeeded in doing as narrated in several verses of the Quran. The messages of Allah were brought by one Prophet and recorded in one holy Quran. There is no other Quran, or versions of it, or editions which carry different texts.