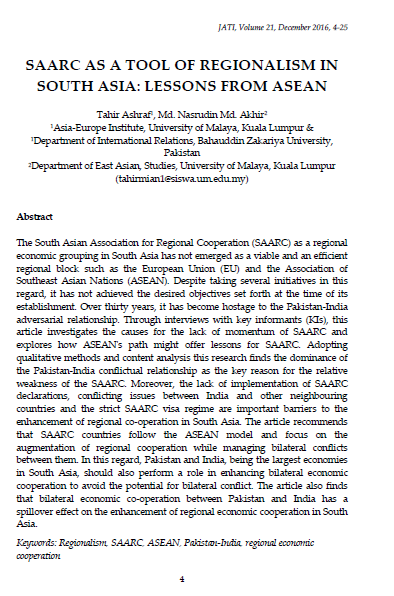 The South Asian Association for Regional Cooperation (SAARC) as a regional economic grouping in South Asia has not emerged as a viable and an efficient regional block such as the European Union (EU) and the Association of Southeast Asian Nations (ASEAN). Despite taking several initiatives in this regard, it has not achieved the desired objectives set forth at the time of its establishment. Over thirty years, it has become hostage to the Pakistan-India adversarial relationship. Through interviews with key informants (KIs), this article investigates the causes for the lack of momentum of SAARC and explores how ASEAN's path might offer lessons for SAARC. Adopting qualitative methods and content analysis this research finds the dominance of the Pakistan-India conflictual relationship as the key reason for the relative weakness of the SAARC. Moreover, the lack of implementation of SAARC declarations, conflicting issues between India and other neighbouring countries and the strict SAARC visa regime are important barriers to the enhancement of regional co-operation in South Asia. The article recommends that SAARC countries follow the ASEAN model and focus on the augmentation of regional cooperation while managing bilateral conflicts between them. In this regard, Pakistan and India, being the largest economies in South Asia, should also perform a role in enhancing bilateral economic cooperation to avoid the potential for bilateral conflict. The article also finds that bilateral economic co-operation between Pakistan and India has a spillover effect on the enhancement of regional economic cooperation in South Asia. Keywords: Regionalism, SAARC, ASEAN, Pakistan-India, regional economic cooperation