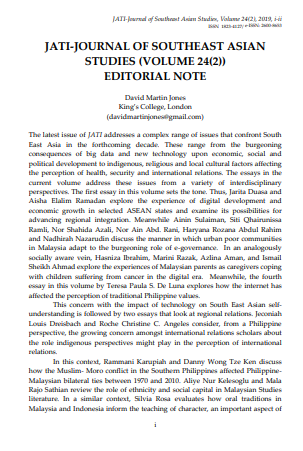 The latest issue of JATI addresses a complex range of issues that confront South East Asia in the forthcoming decade. These range from the burgeoning consequences of big data and new technology upon economic, social and political development to indigenous, religious and local cultural factors affecting the perception of health, security and international relations. The essays in the current volume address these issues from a variety of interdisciplinary perspectives. The first essay in this volume sets the tone. Thus, Jarita Duasa and Aisha Elalim Ramadan explore the experience of digital development and economic growth in selected ASEAN states and examine its possibilities for advancing regional integration.

Meanwhile Ainin Sulaiman, Siti Qhairunissa Ramli, Nor Shahida Azali, Nor Ain Abd. Rani, Haryana Rozana Abdul Rahim and Nadhirah Nazarudin discuss the manner in which urban poor communities in Malaysia adapt to the burgeoning role of e-governance. In an analogously socially aware vein, Hasniza Ibrahim, Marini Razak, Azlina Aman, and Ismail Sheikh Ahmad explore the experiences of Malaysian parents as caregivers coping with children suffering from cancer in the digital era. Meanwhile, another essay in this volume by Teresa Paula S. De Luna explores how the internet has affected the perception of traditional Philippine values.

In this context, Rammani Karupiah and Danny Wong Tze Ken discuss how the Muslim- Moro conflict in the Southern Philippines affected PhilippineMalaysian bilateral ties between 1970 and 2010. Aliye Nur Kelesoglu and Mala Rajo Sathian review the role of ethnicity and social capital in Malaysian Studies literature. In a similar context, Silvia Rosa evaluates how oral traditions in Malaysia and Indonesia inform the teaching of character, an important aspect of social capital, whilst Oktavianus explores the landscape of cultural identity amongst the Minangkabau people of West Sumatra as it is reflected in the culinary business of the region. Rachel Chan Suet Kay’s perceptive essay on tradition and community participation in heritage management in Malaysia completes the volume. Her essay further reinforces the wider theme of this volume, namely, the complex interaction of modernity and tradition in the global age of big data and the internet.