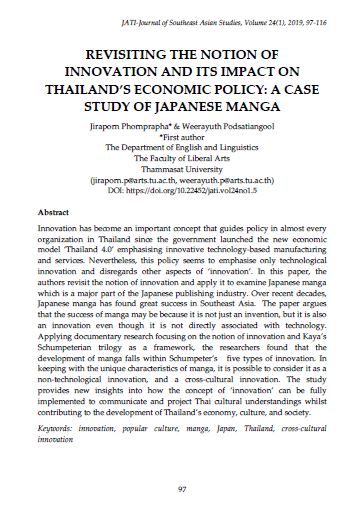 Innovation has become an important concept that guides policy in almost every organization in Thailand since the government launched the new economic model ‘Thailand 4.0’ emphasising innovative technology-based manufacturing and services. Nevertheless, this policy seems to emphasise only technological innovation and disregards other aspects of ‘innovation’. In this paper, the authors revisit the notion of innovation and apply it to examine Japanese manga which is a major part of the Japanese publishing industry. Over recent decades, Japanese manga has found great success in Southeast Asia.  The paper argues that the success of manga may be because it is not just an invention, but it is also an innovation even though it is not directly associated with technology. Applying documentary research focusing on the notion of innovation and Kaya’s Schumpeterian trilogy as a framework, the researchers found that the development of manga falls within Schumpeter’s   five types of innovation. In keeping with the unique characteristics of manga, it is possible to consider it as a non-technological innovation, and a cross-cultural innovation. The study provides new insights into how the concept of ‘innovation’ can be fully implemented to communicate and project Thai cultural understandings whilst contributing to the development of Thailand’s economy, culture, and society.