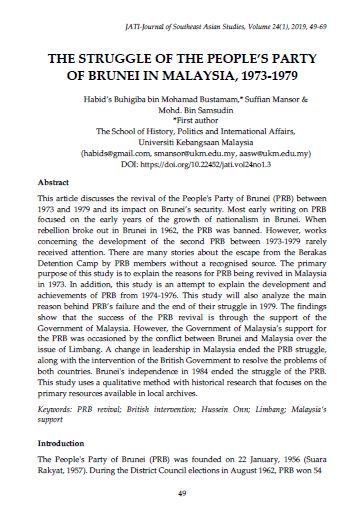 This article discusses the revival of the People's Party of Brunei (PRB) between 1973 and 1979 and its impact on Brunei’s security. Most early writing on PRB focused on the early years of the growth of nationalism in Brunei. When rebellion broke out in Brunei in 1962, the PRB was banned. However, works concerning the development of the second PRB between 1973-1979 rarely received attention. There are many stories about the escape from the Berakas Detention Camp by PRB members without a recognised source. The primary purpose of this study is to explain the reasons for PRB being revived in Malaysia in 1973. In addition, this study is an attempt to explain the development and achievements of PRB from 1974-1976. This study will also analyze the main reason behind PRB’s failure and the end of their struggle in 1979. The findings show that the success of the PRB revival is through the support of the Government of Malaysia. However, the Government of Malaysia’s support for the PRB was occasioned by the conflict between Brunei and Malaysia over the issue of Limbang. A change in leadership in Malaysia ended the PRB struggle, along with the intervention of the British Government to resolve the problems of both countries. Brunei's independence in 1984 ended the struggle of the PRB. This study uses a qualitative method with historical research that focuses on the primary resources available in local archives.