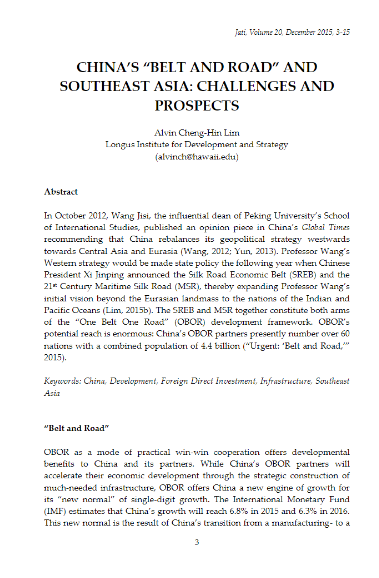 In October 2012, Wang Jisi, the influential dean of Peking University’s School of International Studies, published an opinion piece in China’s Global Timesrecommending that China rebalancesits geopolitical strategy westwards towards Central Asia and Eurasia (Wang, 2012; Yun, 2013). Professor Wang’s Western strategy would be made state policy the following year when Chinese President Xi Jinping announced the Silk Road Economic Belt (SREB) and the 21stCentury Maritime Silk Road (MSR), thereby expanding Professor Wang’s initial vision beyond the Eurasian landmass to the nations of the Indian and Pacific Oceans (Lim, 2015b). The SREB and MSR together constitute both arms of the “One Belt One Road” (OBOR) development framework. OBOR’s potential reach is enormous: China’s OBOR partners presently number over 60 nations with a combined population of 4.4 billion (“Urgent: ‘Belt and Road,’” 2015).