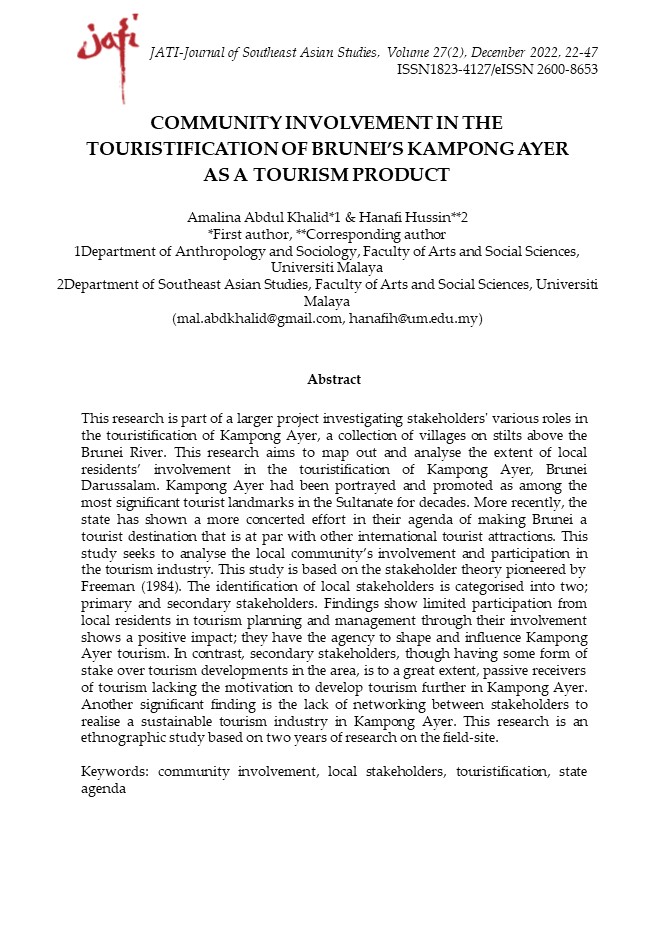 This research is part of a larger project investigating stakeholders' various roles in the touristification of Kampong Ayer, a collection of villages on stilts above the Brunei River. This research aims to map out and analyse the extent of local residents’ involvement in the touristification of Kampong Ayer, Brunei Darussalam. Kampong Ayer had been portrayed and promoted as among the most significant tourist landmarks in the Sultanate for decades. More recently, the state has shown a more concerted effort in their agenda of making Brunei a tourist destination that is at par with other international tourist attractions. This study seeks to analyse the local community’s involvement and participation in the tourism industry. This study is based on the stakeholder theory pioneered by Freeman (1984). The identification of local stakeholders is categorised into two; primary and secondary stakeholders. Findings show limited participation from local residents in tourism planning and management through their involvement shows a positive impact; they have the agency to shape and influence Kampong Ayer tourism. In contrast, secondary stakeholders, though having some form of stake over tourism developments in the area, is to a great extent, passive receivers of tourism lacking the motivation to develop tourism further in Kampong Ayer. Another significant finding is the lack of networking between stakeholders to realise a sustainable tourism industry in Kampong Ayer. This research is an ethnographic study based on two years of research on the field-site.